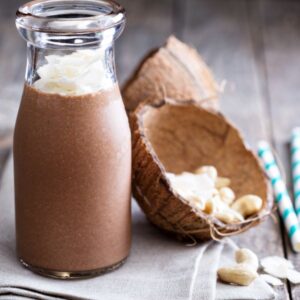 When you make a cake or batch of cookies, the recipe typically includes eggs, milk, butter, flour and baking powder. Yet, these dairy and animal products are not part of a vegan diet.

It’s possible to bake while maintaining a vegan or plant-based lifestyle! Consider these common ingredient substitutes to update your favorite dessert recipes.

In general, cow-sourced milk can be replaced with a vegan or plant-based alternative in a one-to-one ratio. This straightforward swap applies to soy, coconut, nut-based, pea and quinoa milk. Of these, soy has the greatest amount of protein and reacts in a similar fashion.

Beyond replacing the milk in a recipe, also consider:

For Cream and Butter Milk

These dairy products add a richer texture, more intense flavor and moisture to a recipe. Common substitutes include:

Butter serves as a binder and moisture source. More stores now carry vegan butter alternatives, but you can substitute coconut and other neutral-tasting oils roughly one-for-one, once melted.

However, this substitution only works if the recipe calls for melted butter. For a solid or softened alternative, you’ll need to store the coconut oil at room temperature. As this source tends to warm at a faster rate, any dough you create may need to be chilled before putting your creation in the oven.

Aside from these sources, apple sauce, smashed avocado, pumpkin puree and sweet potato puree all offer similar binding properties. In these cases, consider how the ingredient’s flavor will influence the recipe’s overall composition.

Egg replacements are also growing in popularity and variety. These generally come in powdered form and need to be mixed with water ahead of time to help a recipe rise or give it a lighter, fluffier texture.

Aquafaba, or chickpea water helps create a foamy, meringue texture for pies and cookies. Substitute three tablespoons per one egg.

If you’re not able to find an egg substitute, or if eggs are simply being used as a binder, some vegan alternatives include:

Based on their source and processing method, sugar and honey are not vegan. Substitutes used with a one-to-one replacement include:

Interested in trying out vegan desserts? Finish your meal at Colony Diner with a slice of our vegan cake or pie, a few scoops of vegan ice cream or a milkshake! Stop by our Wallingford restaurant or place an order for pickup today.