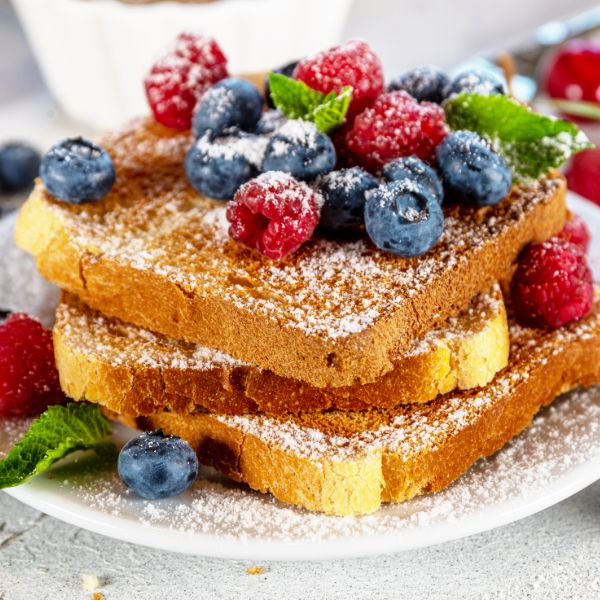 French toast is an easy recipe to try at home but the small touches can make all the difference. You want the bread to taste slightly eggy yet sweet from the vanilla and cinnamon. It should be also soft but still have some structure when your fork sinks in.

Understand the different types of bread used to make French toast and their distinctive characteristics.

Called “pain perdu” or “lost bread” in French, this recipe started as a way to repurpose stale bread. While the bread doesn’t have to be stale for today’s preparation, you want pieces that are slightly firm yet not so tough or hard that it’s challenging to eat.

To prepare French toast, your bread needs to be able to soak in the batter – a mix of milk, eggs, sugar, vanilla and cinnamon – and not fall apart. The bread should also be absorbent enough to fully soak through but hold up as you fry and flip it.

This is the quintessential “eggy” French toast bread. Challah has a somewhat sturdy exterior from the egg wash and braided shape, coupled with an airy interior that will absorb the batter well.

Brioche has gained some traction as a French toast bread for its shared characteristics with challah. Brioche uses a greater percentage of butter and eggs, making it slightly airier but comparably soft and sweet result once fully cooked. As such, brioche should be soaked for a shorter time than challah.

While sourdough is often considered a sandwich or toast bread, it also works for French toast. This bread tends to be firmer than other available options, requiring a longer soaking time in your batter, but presents a tangier flavor coupled with sweetness once cooked. The firmness of sourdough also means it’s less likely to fall apart than other types.

Also called a baguette, French bread is also growing in popularity for French toast. A thicker crust holds the bread together after soaking and the softer interior will fully absorb batter. Keep in mind, the shape often results in round rather than the usual square-shaped pieces.

Encompassing traditional sandwich bread and thicker Texas toast, white bread is often the default for French toast. A thinner crust and softer interior do just what you expect, however certain types may be too thin for French toast and fall apart quickly. Also make sure this bread is at least a day old, if not slightly stale.

Croissants can be tricky for making French toast but their flaky, buttery texture delivers a delectable combination with fruit and maple syrup. Look for a slightly stale croissant, split it in half like you’re making a sandwich, and quickly immerse it into your batter before adding it to the pan.

What’s your favorite type of French toast? Find white bread, Texas style and challah, complete with fruit and other toppings at Colony Diner. Come by for breakfast or place a to-go order today!

Please Share This
Read Previous Article:
« 5 Ways to Improve Your Sandwich
Read Next Article:
Using Tofu as an Egg Substitute »