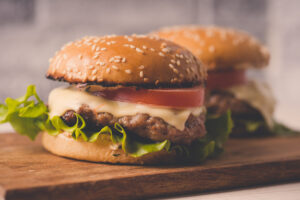 As the plant-based burger has grown in popularity this year, we’ve added this choice to our vegan selections! What exactly is the Impossible™ Burger?

What Makes It Impossible?

Created by Impossible Foods, the meatless burger has a similar color, flavor and even “bleeds” like ground beef. It has four main ingredients:

At Colony Diner, our Impossible Burger is topped with vegan cheddar, lettuce, tomato and vegan mayo, served with French fries or a small house salad.

This vegan substitute for ground beef is safe to eat, unless you are allergic to its ingredients. The burger is made from genetically modified soy and the FDA has approved the soy-based heme that flavors the meat. The Impossible Burger and regular beef patty are close in calories but plant-based meat has fiber content and typically less fat than animal meat.

Red meat has been linked to common health concerns, including obesity and heart disease, so meat substitutes are often considered more healthful. Plants also emit less greenhouse emissions than the production of meat for our consumption.

In addition to the Impossible Burger, we use plant-based ground beef to make our vegan patty melt, vegan nachos, impossible quesadilla and vegan spaghetti with meatballs.

There truly is something for everyone at Colony Diner. Visit our Wallingford restaurant to try our diner classics, new vegan and gluten-free menu items!